…or… A Day in the Life of a Movie Extra.

So, the back story…it’s wintertime! It’s cold, it’s dark. I’ve got the winter blahs. Creatively I go thru what I call “winter time shut down mode”. And about three weeks ago, I had the flu–which is the pits, and I still don’t have my strength back.

So, I’ve got to do something that is NOT sitting in the house while the sky is gray outside. There was a casting call this week. I figured out my available days, which amounted to Sunday, and submitted. Two days later, the phone rings, and I’ve got the gig! Cool!

So, the instructions are…bring as many “looks” (wardrobe) as you can. They didn’t know the time, nor location, so they give you this phone number to call. It will have a recorded message on it. They say to call Saturday evening after 8. I call about 6:30, just hoping. Not updated yet, but the Saturday call time was 1pm. One of the emails said the weekend call time was 11 am. So, those are rather reasonable.

I called that number 3 times, but it still wasn’t updated. I was wiped out after the day job, so finally I went to lay down. I thought I’d lay there awhile, and call about 10 or so. I didn’t really sleep, but did doze some. When I finally looked at the clock, it was 2:00am. Seems funny to make a business phone call at 2 am, but I need my call time.

Whoops! I had set my alarm for 7 the night before. Okay, I changed that to 5:30. I had already chosen my clothes and put gas in the car. But, I still needed to iron clothes and wash my hair, etc, on the day. Not to mention–I have learned my lessons on past shoot dates. Do NOT limit your calorie consumption on movie days. Eat a good breakfast–more than you normally would. Have snacks with you. If your call time is 9am, then lunch won’t be till at least 6 hours later.

So, it’s drizzly, foggy, and the highway is wet. We’ve had very little moisture, so the road is slick, since it hasn’t been washed off. And the thing is….since I got awake at 2 am, I never did go back to sleep. So, by 6am, the last thing I want to do is get the car, drive 100 miles, and work all day. But, if I do go, then I know I will be sooo glad I went. And I gave my word, and they are expecting me.

So, off I go to Oklahoma City to work on a movie.

I have to say…they built us a pretty nice set. It’s about the nicest movie set I’ve ever seen. 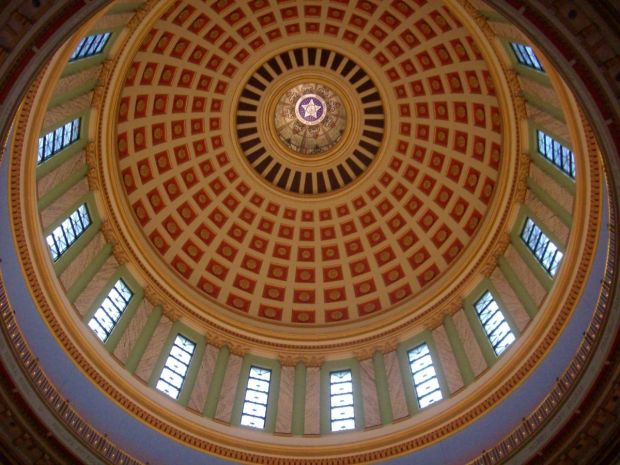 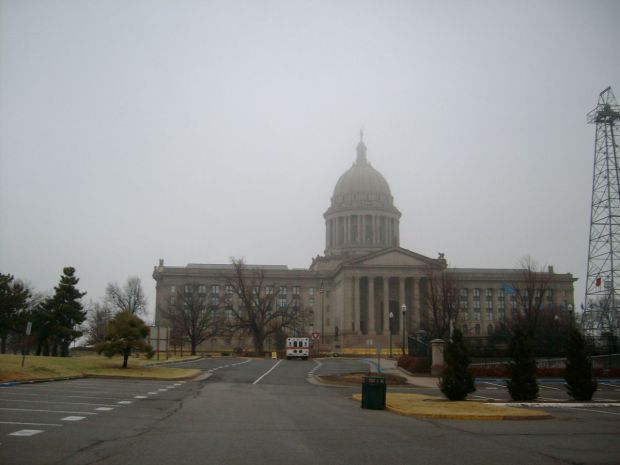 So, the extras holding area is the 4th floor. Marble floors, and you are sitting under the rotunda. Very, very cool. The architecture…the art.

Call time was 9am. They were shooting soon after, and it seemed to be a very organized set. They were shooting with a REDOne camera, which seems to be the envy of anyone who is in moviemaking these days. It’s top-of-the-line technology, if you’re going to shoot digital. And the crew was easy and efficient, and handled things so well. I love it! I’ve been on sets that are disorganized and sooo awful. This was a good experience. 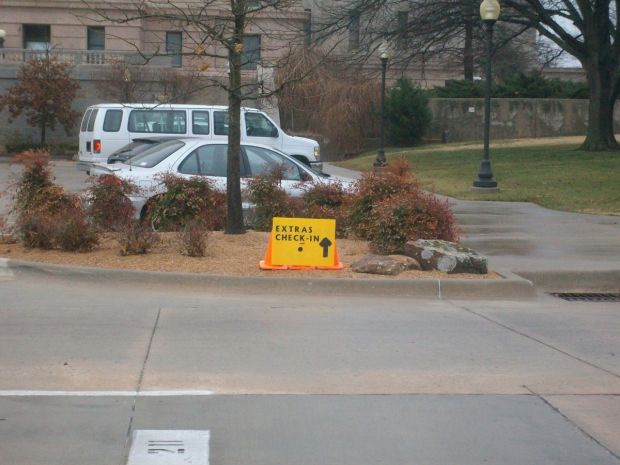 I took this driving in. This is a tower on the OCU (Oklahoma City University) campus, and you can’t see the top of the building, for the fog. So, that looks like a dreary winter day, and for all I know, I’ll be outside as a protester, getting rained on in the damp and cold all day.

So, after about 3 hours in the holding area, they came to get me. They walked about 6 of us, all wearing business suits, in the Senate chamber! I played a senator for 3 hours!

Well, that wasn’t expected. (But…I can’t wait for someone to ask me what I’ve been doing this week….’gee…um..you know…I was a senator…’)

As I said, lunch was 3pm, but I had eaten well ahead of time, and made it fine. It was hot dogs, and mac and cheese and lettuce salad, with a paper thin slice of pound cake.

Trouble is…I don’t eat hot dogs, due to the nitrates. So, I got a bun, and put ketchup, mustard and relish on the bun and ate it. Got the mac and cheese and salad, and it was fine. So, they gave us a very nice lunch, and for that I thank them.

After lunch, we moved outside, where the sun had come out, and it was quite warm. And they wanted us to wear coats and hats and scarves and gloves, as if it was cold. I had figured–protesters, we’d hold placards and walk round and round and protest. No…we were an angry mob scene, and had to rush and tear at the lead actor.

I have never protested anything in my life. Never been in an angry mob.

Guess I can cross those two things off of my bucket list (not that they were on the bucket list in the first place! Ha! My bucket list is  more about things like…acting in movies and working with talented actors…)

Anyway, the first take where we were an angry mob, rushing out for blood to seek revenge on the lead actor–they said we did okay…except that we were all smiling too much!

It’s great to have another movie “in the pipeline”. Who knows when it will be released, or how it will be edited? Maybe I’ll see myself on screen, and maybe I won’t. Still, it was a good day. I can be entertained just by watching the technical setups. It’s fun to talk with other actors and people like me (those who live to entertain). It’s nice to do something different. It’s nice to go into a totally unknown situation and make new friends. It’s nice to have something new to remember and think about.

Who knows? But, it’ll be fun to find out.

This entry was posted on January 28, 2013, 4:07 am and is filed under Acting, Creativity, Entertainment, Movies. You can follow any responses to this entry through RSS 2.0. You can leave a response, or trackback from your own site.