From Oklahoma to Russia in an hour and a half

Or….scenes from a movie extra day 2.

So, last Wednesday, I got called back to work on the movie as an extra. You have this phone number to call, and it gives you the time and location of where you show up. So, I’m supposed to show up in Guthrie, OK at 11:30 on Wednesday….at the Scottish Rite Temple. 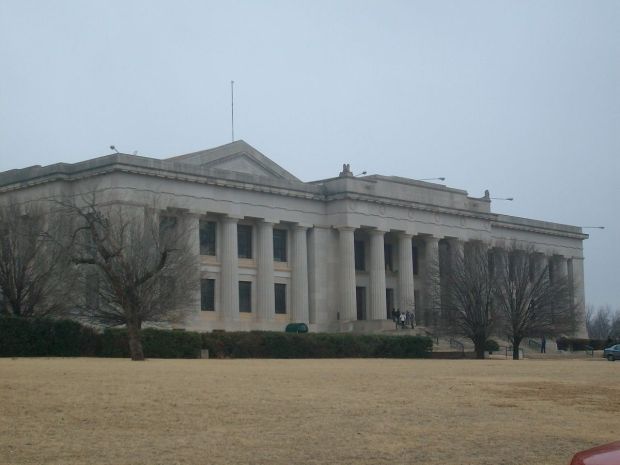 See those columns on the front of the building? Pay attention to the left one. More on that later.

So, it takes me about an hour and a half to get to Guthrie, and when I get there,  the back of the temple doubles as Russia. They had Russian cars and put men in Russian police uniforms. This is super cool. 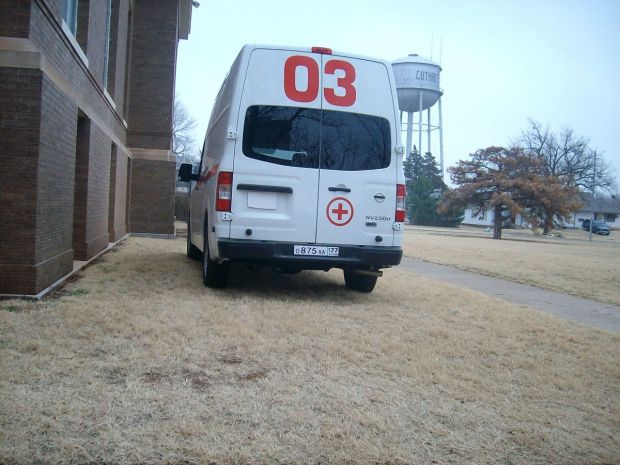 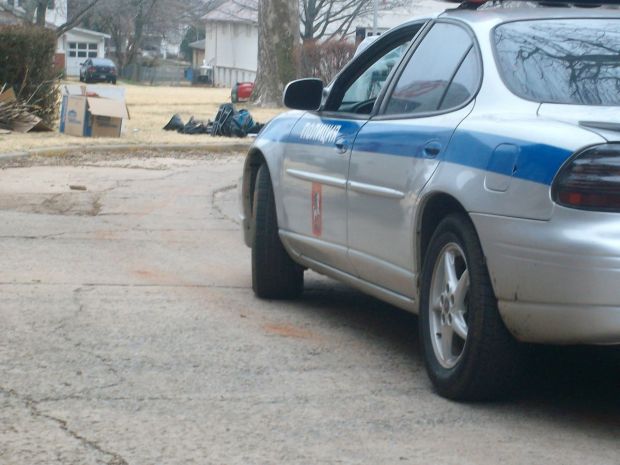 They staged a fight scene. And they went really far with it. Was really amazing to watch. I had heard that they wanted maybe 200 extras that day. (You hear a lot of things, but you can’t be sure of anything, and when I got there, I heard that they had 31 extras on the sign in sheet. Whoops!) I’m supposed to play “angry mob”.  So, in this first scene, while the men are fighting, several of us ran thru the shot in the background.

Now, under normal circumstances, I wouldn’t give specifics on a movie job, or on someone else’s production. If they asked me to sign a confidentiality agreement, I would sign it and honor it. So, when I made the previous blog post, I kept it rather vague.

Then I started surfing the web, and the principles are blogging and tweeting about this experience, and posting all sorts of behind the scenes shots.

It has many stars, among them, Casper Van Dien, Victoria Summer and Catherine Oxenberg.

There is even a hashtag #Higher Mission

Okay…so if everyone else is posting behind the scenes stuff, cool! 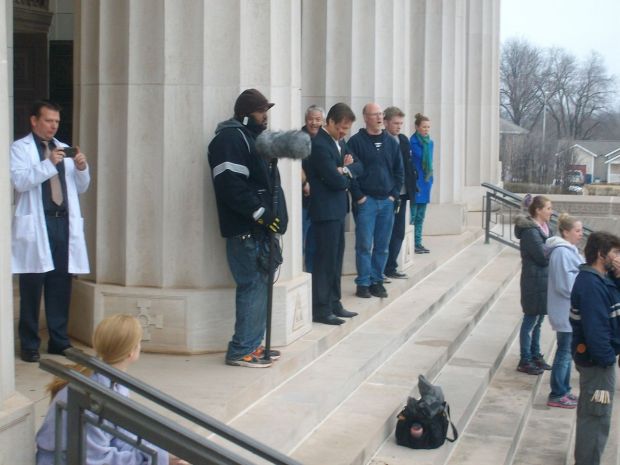 Remember that pillar I mentioned? The slab next to it has about a 6 feet drop down to these steps. And about a 20 foot drop down to the ground on the other side. I stood as much in the middle of this slab as I could. I have issues with energy management and balance, and I didn’t trust myself around the edge. And here are all these young men, taking leaps and jumping around. I stayed up there about 2 1/2 hours. You could SEE so much of the action, and the scene is happening right in front of me. 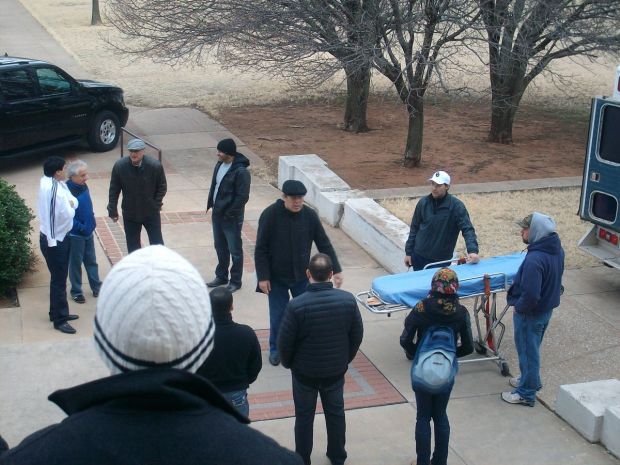 Scenes from the pillar

It’s kind of a standard rule on movie sets– you don’t bother the principles. They have their job to do, and you do yours. Well, let me tell you, Casper Van Dien is a riot. He was super cool, and easy going and thoroughly entertained everybody. You can do a lot of waiting around while they set up shots, and I’m about 2 people behind him, and Ms. Summer. Well, he told stories, cracked jokes, pulled funny pranks. It was soooo amazing to get to be on such a relaxed and fun set. 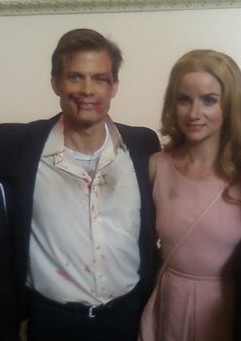 I played a reporter. We had to push at the police to try to rush the principles. 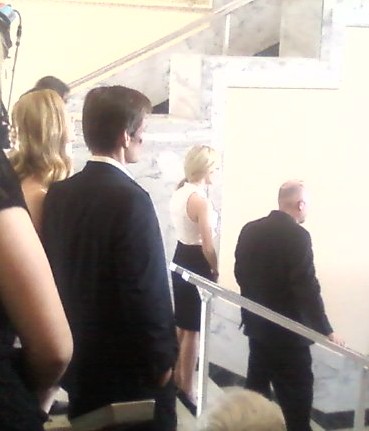 waiting on a scene

This is such a super fun movie set. It was so relaxed and pleasant. [There are some that are the opposite–believe me]

In most instances, when you were not specifically in a shot, they move you back to extras holding.. 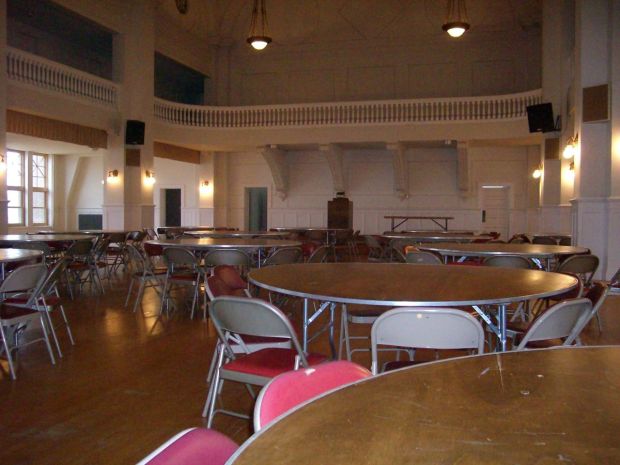 But in this instance, if you weren’t specifically in the shot, they let you hang around and watch. They even told us where the chairs were upstairs, and if you were not in the shot, you could sit there.

So from the balcony, you could see the action. 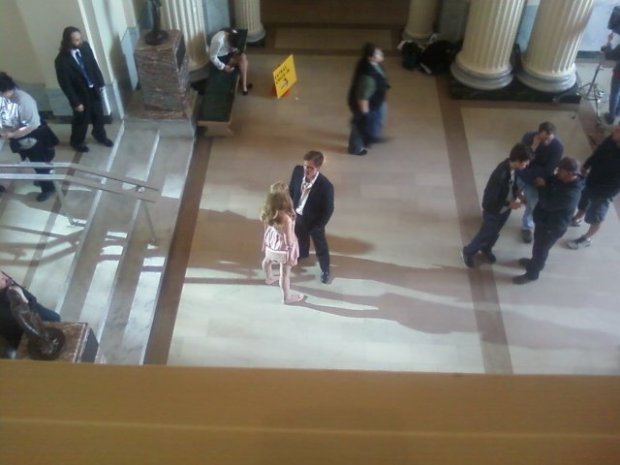 The principles on the main floor

The day was a BLAST! This was the most I had done on a movie, or on any acting gig. (And I’ve been sore the last couple of days, so I could feel the physical toll–ha!). Those floors were marble and hard. Imagine standing in heels for about 3 hours in one spot on those floors.

It’s kind of amazing. I didn’t feel that well to start with that day. Thank goodness it was a later start time, because I was sure slow that morning. But, once I got signed in, we didn’t have to wait long till they called us. And once I went out on set, some sort of mental thing takes over. It’s kind of amazing. In normal life, my brain is always “on”. I can’t turn it off. But, when I’m on set, I’m on set. Nothing else in the world exists. I am completely in that moment. It’s such a joy to experience that.

Then you go off set and back to the holding area, and I don’t feel well again. But, boom,  as soon as you are back on set, the magic happens again.

Yes, it’s tiring and fatiguing. But, something about this process feeds you. It fills something in you.

Part of the take-away experience is the people you share the experience with.

I’ve done this enough, that I divide the extras into three categories:

3) The ones who enjoy every single part of the experience.

Well, on this day, there were so many of the #3 types there. Young people who want to make movies for a living and who come to set and soak up everything. They are never bored and entertained by it all.

Getting to meet those people, and see their enthusiasm–that is the icing on the cake!

This entry was posted on February 10, 2013, 2:40 am and is filed under Acting, Creativity, Entertainment, Filming, Movies. You can follow any responses to this entry through RSS 2.0. You can leave a response, or trackback from your own site.